In 2022, the Board supported an Origin Story Committee to document its early history. While still a project-in-progress, here are some early founding members and teachers in the USA, Mexico and Canada. There are 3 parts: Video Interviews of many of our Founding Members, and the At-a-glance graphic (2001-2005), and text Timeline (beginnings to present day), and links to the video interviews. 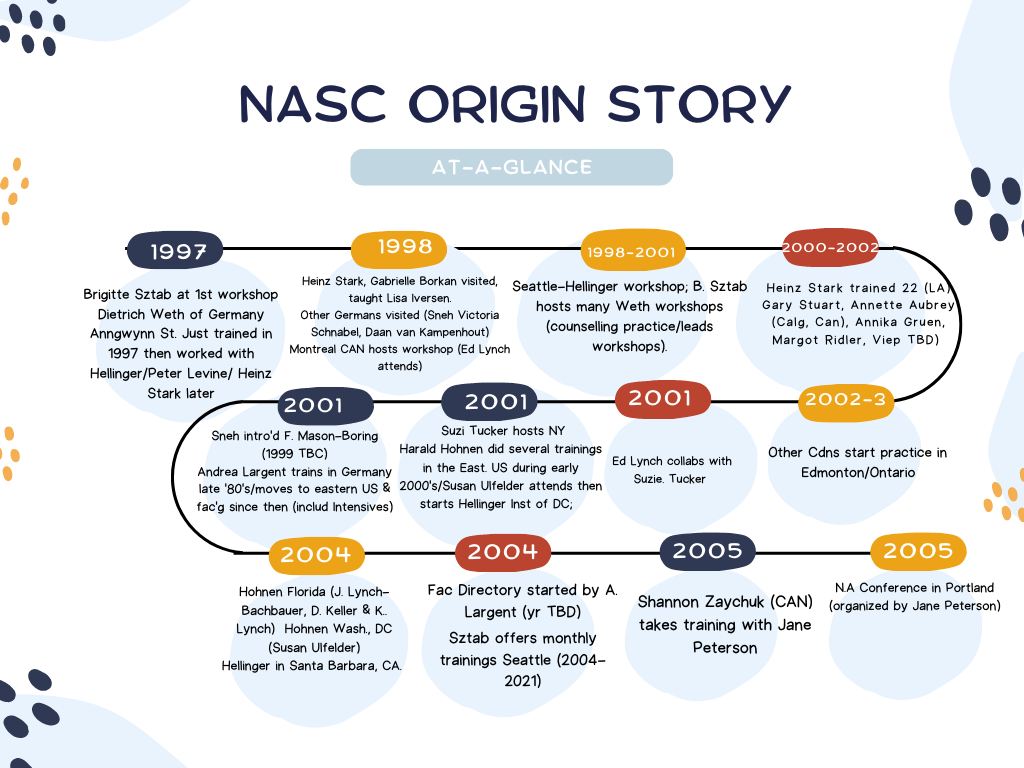 Thank you Jim Shine, community member and Board member, for compiling this timeline (based on personal experience, interviews of founding members, and NASC archives)
Version: Dec 2022

US Pacific Northwest:
Heinz Stark, Gabrielle Borkan visited, introduced Lisa Iversen to the work ~ 1998.
Many Germans visited, such as Sneh Victoria Schnabel, Daan van Kampenhout. Lisa used to joke in the early days about the “German of the month”.
Sneh introduced Francesca Mason Boring to the work, 1999 or so. Still need more details on her chronology in the early 2000s.
Brigitte Sztab also learned about constellations in the Pacific NW during this time; she met Dietrich Weth in Germany and then brought him to Washington state for several years, hosting his workshops. She began her own facilitating in 2001, and started training students in 2004.
Others (perhaps): John Cheney, Jane Peterson, Mark Johnson.

US West Coast:
Anngwyn St. Just  learned directly from Hellinger at first, in the mid-1990s, first trained in 1997. Worked  with Peter Levine in Colorado integrating trauma and constellations, then collaborated with Heinz Stark. Went with Hellinger to Russia in the early 2000s. Moved to Arizona in 2004.
Gary Stuart trained with Heinz Stark in Los Angeles, CA, 2000-2002, started doing work with clients shortly after that.
Other early California facilitators: Gabrielle Borkan, Margot Ridler.

There were West Coast intensives in the early 2000s.

Western Canada:
Annette Aubrey first studied with Heinz Stark in 2001, trained with him for 2 years. First facilitator in western Canada (in Calgary); others followed suit in Edmonton and Ontario. Annette mentions Shannon Zaychuk prominently.  Jonathan Hooton was an early practitioner in Edmonton – need timeline on him.

Eastern US:
Andrea Largent first worked in constellations in Germany starting around 1988 or 1989, studying with Albrecht Mahr in Wurzburg, Bert Hellinger, and Claudia Mengel. She moved to the east coast of the US in 1999 and has been facilitating since then. She has been running a small East Coast Intensive since 2000, originally assisted by Claudia Mengel. She starte dtraining her own students in 2002. She has also maintained a Facilitator Directory for US facilitators for many years.

Susan Ulfelder from the Washington, DC area first discovered Hellinger at a workshop in New York (co-facilitated by Dietrich Klinghardt) in 1999 or 2000. She then invited Hellinger to several cancer conferences in the Washington area and founded the Hellinger Institute of DC in the early 2000s. She trained with Harald Hohnen (Hellinger’s former camera man and scheduler) in 2001. She attended several California intensives in the early 2000s and presented at a Mexican workshop in 2003 (the only American who attended). She also attended several California intensives from 2003 to 2005.

Suzie Tucker was also in Harald Hohnen’s first training in 2001. Ed Lynch trained with Suzie and they collaborated in the 2000s as colleagues. Ed first discovered constellations in Montreal in 1998, and attended workshops with Hellinger, Hunter Beaumont, Jakob Schneider, Gunthard Weber, and Stephan Hausner in the US and Germany shortly before and after 2000.